"The Music Man" at Broadway Rose

"The Music Man" is an ambitious production from Broadway Rose. I would wager that it is among the most complex shows they have mounted. The large cast is impressive in every way, but especially with regard to choreography. The band is top-notch and fills the intimate space with so much melody it seems barely able to contain it.

The sets and props are magnificent, particularly the train that comes rushing out at you, complete with smoke.  Joe Theissen shines as the cunning con man Harold Hill, and Thomas Prislac Jr. is an appropriately stuffy Mayor Shinn.

It's a fun show, and again, a lavish one. Thoroughly enjoyable in every respect. Here's my favorite photo from the press-kit which I think does the best job of capturing the scope of the choreography. 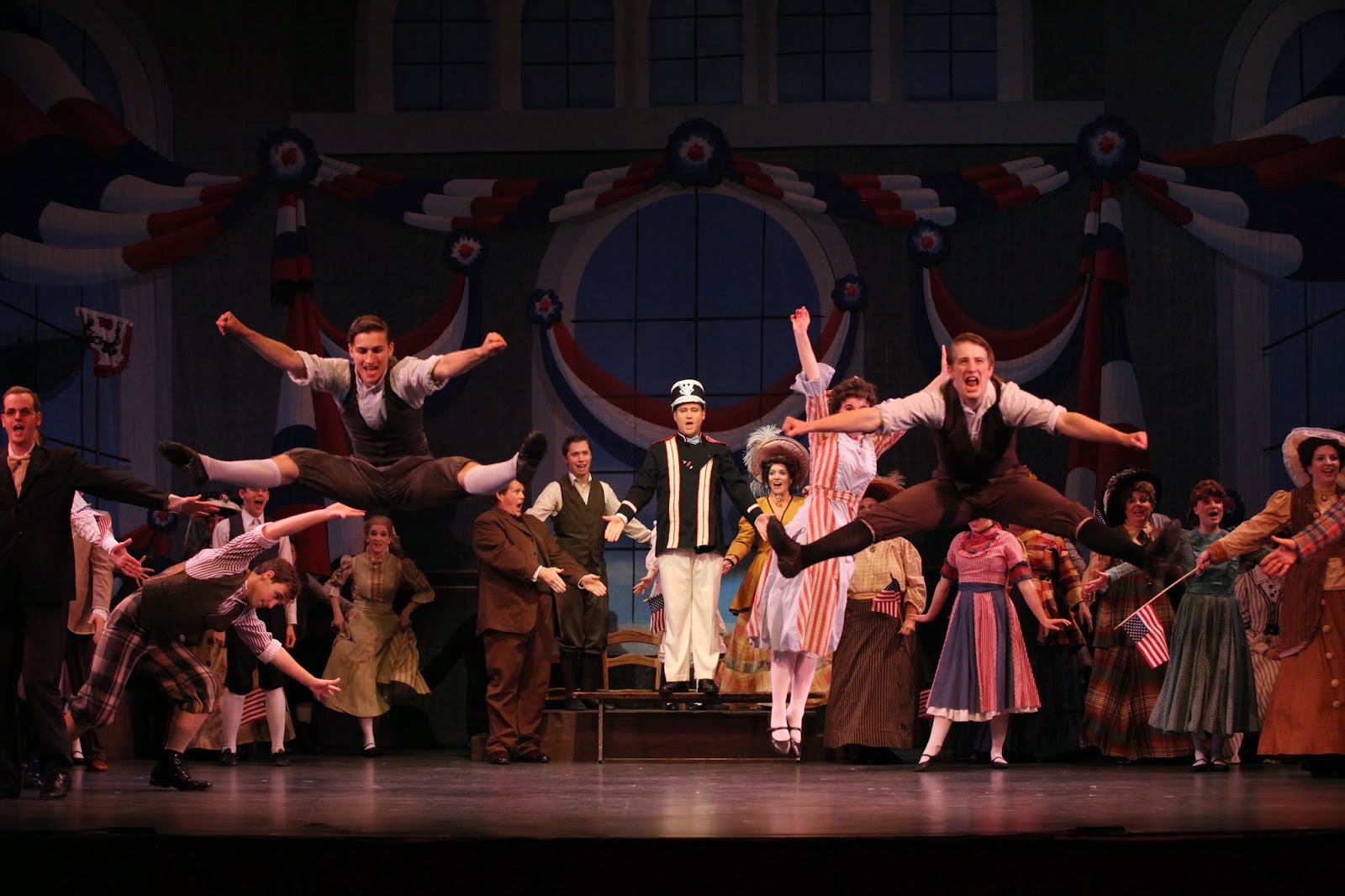 "The Playboy of the Western World" @ Artists Rep.

I'm afraid to confess this because I think it makes me sound not-so-smart, but "The Playboy of the Western World" is pretty hard to follow. Of course, that really shouldn't come as much of a surprise, given that it was written in 1907, in a strange Irish-what's the word--dialect? Artists Rep seems well-aware of the play's difficulty, providing links to the script and other resources on their website, and yet, I think director Damaso Rodriguez sums up the complexity best with this passage from his Director's Note:  "On the page, Synge's language seems impossibly dense, each line requiring a Google search to make sense of what's being said."

In this light, perhaps I should feel that I am in good company in being frequently lost in terms of the plot.  Despite this, there is still praise to be given, particularly to Michael Mendelson, who once again proves himself ready for Herculean acting tasks, the lyricism of the dialogue can not be denied. If you feel up to it, you might do better than I did, and even if not, watching some of Portland's finest actors take on a challenge like this is something to see.
at 6:56 PM No comments:

"The Beauty Queen of Leenane" at Third Rail Repertory Theatre

"The Beauty Queen of Leenane" marks my first show as an invited critic to Third Rail Rep, though I've been a long time fan of their work. It is also gratifying to see them fitting so comfortably into their new home at the Winningstad Theatre. In fact, if memory serves, the last production I saw of theirs was also a Martin McDonagh play, "A Skull in Connemara," on my birthday during their first "Leenane Day" in which a full production of a play in the Trilogy is performed after readings of the other two.

"Beauty Queen" is the first of the Trilogy, a play which mostly focuses on the strained relationship of Maureen and her mother, Mag, though there is room for McDonagh's trademark odd-ball supporting characters, as well as some of the darkness he is also known for, but I'd better leave it at that.... Both actresses are in top form, Jayne Taini is the grating and conniving Mag and Maureen is Maureen Porter, in a role she seems meant to play, right down to her first name.

It is an honor to be added to Third Rail's Press List. I can not wait for next season.

"Brighton Beach Memoirs" at Clackamas Community College is once again a truly ambitious undertaking, rivaling their last production of Neighborhood 3:Requisition of Doom, again directed by James Eikrem with a set by Chris Whitten. This one is the multi-room home of the Jerome family, the alter-egos of Neil Simon's own.

"Brighton Beach Memoirs" is the first in Simon's trilogy known as the Eugene Plays, after his own character, Eugene Morris Jerome. This play concerns Eugene's adolescence, followed by his service in World War II in "Biloxi Blues" and finally his fledgling career as a writer in "Broadway Bound."

The cast is top-notch. Branden McFarland is a ceaselessly likable Eugene. Jayne Hall is the elder brother, Stanley, whose main function is to be a fount of endless "adult" knowledge for Eugene. Halley Houser is a stoic and endearing Kate, the family matriarch, a perfect match for her wise, yet stubborn husband, Jack. Blanche Morton (Jennifer Whitten ) is Kate's sister and complete opposite--frail and asthmatic--but sympathetic nonetheless. Her daughters, Nora and Laurie complete the out-sized brood, the younger daughter shares her mother's frailty, while the elder provides oh-so forbidden fantasy for Eugene.

Unfortunately, once again, I saw a late performance, and the show is now closed. But, the production was so well received that I hold out hope that they may make their way through the trilogy. If they do, I will be sure to give you a heads-up, because it will doubtlessly be worth seeing.
at 2:05 PM No comments:

You know a production is strange when even the Director's Note says, "Whaaat? How's that going to work?"A musical about Lizzie Borden is weird enough on its own, but not entirely unheard of, I mean "Sweeney Todd" is based on fact, right? It's the "punk-rock musical" part that sends it into the stratosphere of bizarreness. Somehow it works, and I don't just mean that I enjoyed it, or that it managed to transcend the "Whaaat?" Factor. No, what I'm trying to articulate is that "Lizzie"succeeds in all of those ways,  and also pulls off a difficult tonal balancing act. Of course it's dark, and, as is to be expected, there's also a healthy dose of dark-humor mixed-in, culminating in a number with a giant blood-spraying axe that closes Act I, but there is also room for quieter, more serious numbers, and it turns out that those are the ones that become unexpected

The band deserves special mention. I suppose that six musicians is a fairly large band, but the music is so...thumping that you'd expect a group twice that size.

Beyond the band, beyond the general fun of it all, the best part of "Lizzie" is that it seems to be a musical for people who don't particularly like traditional musicals (myself included). There's almost none of the Broadway Belting that even seeps into compositions by rock artists who should know better. This is a feat indeed.
at 12:35 PM No comments: