"Lungs" reminded me a little of "Constellations" at PCS last Season, in terms of speed at which the narrative moves through wide-swaths of time. "Lungs",  is the slightly better of the two shows, precisely because of its ultimately narrower scope. Despite sharing the time-shifting element, "Constellations" tried to tackle enormous questions of time and space, while still squeezed tightly around the relationship of the couple at its center. "Lungs" on the other hand,  is given greater heft by barreling through courtship, tragedy, betrayal, childbirth, parenting, and death, in 90 minutes. All without feeling overstuffed, and strangely, is both panoramic and focused at the same time. It is one of the most intimate shows I have seen, sometimes uncomfortably so. It should not be missed.
at 8:37 PM No comments:

At times like these, I feel the need to confess that I came to love theatre somewhat late in my life, (the beginning of college.) I did not "grow-up" on it. Therefore, some of the classics still hold surprises for me. For example, "Rose's Turn" is probably the song everyone waits for, and wonders of a given actress: "can she pull it off?" In the case of Sharon Maroney, the answer is an emphatic yes. It is a moment so striking that all which came before it is momentarily reduced to a blur, and yet it also serves to explain everything. It's the strangest feeling, one I have experienced very few times. She owns the thing. Sometimes being uninitiated has its advantages.  I often have trouble choosing a production-photo, not this time: 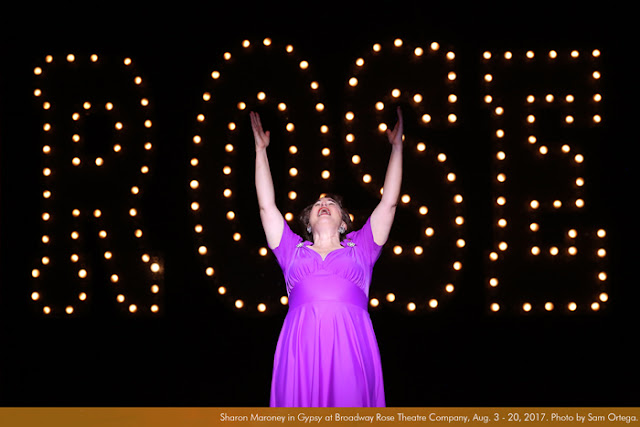