"Thoroughly Modern Millie" is an odd show, to say the least. On the one hand, it is very much an old-school show: Big production numbers, with sweeping choreography. On the other hand I was surprised to read that the show premiered on Broadway in 2002, because there is some humor in the show that made me wince just a bit. Further reading revealed that the film upon which it is based is itself based on another film from 1956, which explains the "dated" humor and stereotypes. Plus, it's set in the 1920s. Long story short, I wouldn't have expected human trafficking to be such a hoot. Someone should tell Liam Neeson he can lighten-up a bit.

Millie Dillmount is a "modern woman" making her way in 1920s New York City, with an eye towards landing a rich husband, possibly her boss at the steno-pool. Along the way she meets handsome, young, and poor Jimmy Smith and she must make her choice.

Heath Hyun Houghton and Samson Syharath are indeed hilarious as Ching Ho and Bun Foo, two brothers who assist in the human trafficking subplot, it is the kind of humor for which you are likely to feel a twinge of guilt, but really what's a little guilty humor now and then?

"Thoroughly Modern Millie" continues Broadway Rose's long and strong tradition of providing quality musicals. There's a 12-piece band! And once again, I feel compelled to share a photo in order to capture the largeness of the show. 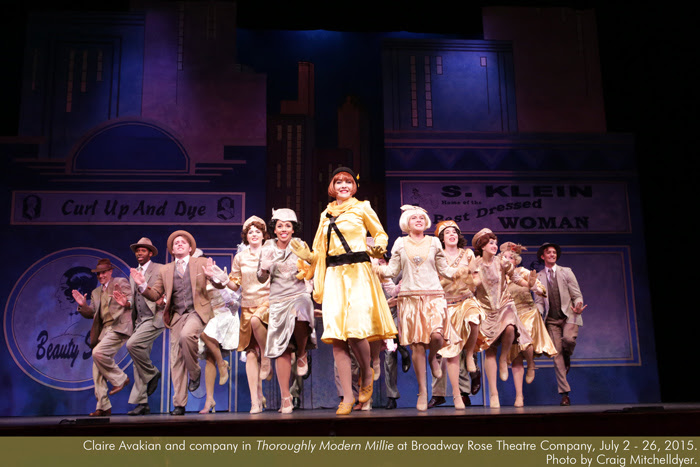