Marc Broussard's music is best described as bayou soul. He sings with all of himself, truly inhabiting the music. I first heard his work on the album "Carencro", and have been a huge fan ever since. Broussard's compositions cover a wide range of styles. There are songs like the thudding "Home" contrasted with sweet, tender tributes to each of his children. Perhaps the best of these tribute songs is "A Life Worth Living," the title track of his most recent album. The song celebrates his recently departed grandmother, and it is quite moving--especially live.  Other stand-outs from his most recent release include "Hurricane Heart" and "Man Ain't Supposed to Cry."

This will be an explosive show. As a small illustration of what I mean: I once saw Broussard in a intimate and brief radio-studio session concert, the the number of musicians on that stage would almost certainly rank among the most ever held on that small stage. They blew the roof off.

But, as testament to the "range" I mentioned earlier, I have also witnessed Broussard's low-key side, in a -if memory serves- mostly acoustic concert, with two other musicians trading off. This show was every bit as fantastic as the high-energy shows that he usually performs.

I am filled with excitement for this show, and I hope to see some of you there. You won't regret it.

I first saw Jason Isbell and the 400 Unit" opening for Justin Townes Earle. It was the very first time i saw an opening band come back for an encore, but the crowd was just that enthusiastic. Isbell's songs are of wildly differing volumes, but always poetic. I think his new album "Something More Than Free" might have eclipsed his previous effort, "Southeastern" (an album my father played incessantly for a long while.) I am not sure a word exists to adequately describe the level of loudness last night in the intimate and church-like Schnitzer., "wall-shaking" will have to suffice.

I am so pleased to see Mr. Isbell rocket so far into fame since I saw his first solo show at the much smaller Aladdin Theater. I also must gratefully report that unlike the John Mellencamp show at the Schnitzer a few weeks ago, the audience stayed mostly in their seats, despite the rollicking atmosphere. The Schnitzer has a wonderful selection of accessible seating locations, and is a peerlessly beautiful venue. Jason Isbell deserves every bit of the accolades he will no doubt receive, and if my father elects to play "Something More Than Free" constantly, I will not mind.
at 12:11 PM No comments: 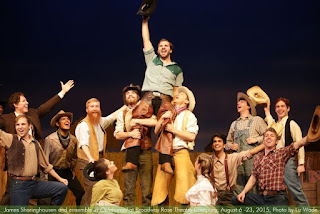