"A Taffeta Christmas" is a proudly upbeat holiday show. This makes it unique among the other seasonal fare on local stages, which are all the opposite. There's PCS' revivals of "Twist Your Dickens" and "The Santaland Diaries" and the upcoming "Great American Trailer Park Christmas Musical" at Stumptown Stages. So, we are very much in need of a show unafraid of a little yuletide cheer. "A Taffeta Christmas" follows the harmonizing girl-group The Taffetas, as they return home to Muncie, Indiana for a Christmas television show.

While "A Taffeta Christmas" is mostly a revue, that doesn't mean there isn't room for comedy. My favorite moment was when The Taffetas dragged a man who looked to be truly unsuspecting, on stage to join them in song as their Cousin Warren. As we've come to expect from Broadway Rose, "A Taffeta Christmas" has extraordinary singers and a talented band. For those of you who wholeheartedly reject the Scrooginess of the other offerings,  "A Taffeta Christmas" is your cup of cocoa.
at 12:54 PM No comments: 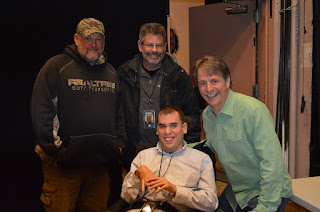 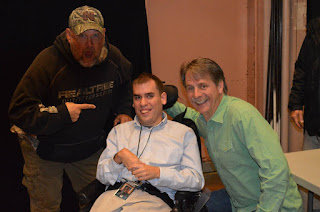 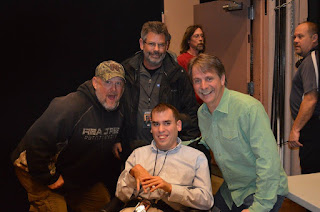 "Flash Ah-Ahhh" is the most delightfully weird thing I have ever seen. It really can only be described as an oxymoron. "Brilliantly bad", maybe? It is a musical based on the 1980 "camp classic" "Flash Gordon" The movie's apparently iconic theme song is by Queen, and the rest of the musical's score is carefully selected Queen songs, that somehow actually fit.  I am a little late to the party with regard to the movie, but mention its title to anyone who has seen it and you will get an imitation of the falsetto chorus from which the musical takes its name.

There are two polar-opposite reasons that the musical succeeds as unbelievably well as it does. One is the unexpectedly fantastic band and singing. Their name is "Mercury Rising, AKA School of Rock," but for the purpose of this production, might I suggest that they change their name to "Flying Blind on a Rocket-Cycle." As soon as I heard that line in the film I thought, "That's a perfect name for a band!" The other is the hilariously low-tech props. Whether it be the villain's stuffed cat, or the "moon rock" rendered as a crumpled paper bag.

It turns out that the man behind "Flash Ah-Ahhh", Steve Coker is also behind "Dex Dixon: Paranormal Dick" which I am eagerly awaiting at Stump Town Stages. I think he is a bright voice in Portland's theatre scene.

Molly Bowman. Remember that name. Her performance as Sylvia the dog in Clackamas Community College's current production of "Sylvia" is of the kind that makes a viewer know she has a bright future. Suffice it to say, she jumps in with all four feet. In fact, when Sylvia is revealed in a portrait at the end of the show, I was somewhat disappointed because I had pictured a much bigger animal. It's a role that's full of surprises. There's this scene which at first seems obligatory, a dog's encounter with a cat, but the scene is so unexpectedly, unrelentingly profane that it actually manages to become shocking, especially if one is sitting in the front row, as I was. There is quite a bit of "other woman" symbolism  in "Sylvia" which was at times humorous, but everything, everything  is overshadowed by Ms. Bowman's fully committed performance. There are times when one thinks, "My God, she must feel so silly!" And yet, she holds it together somehow. To keep from laughing must be a Herculean feat. It also must be noted that it is the only real comedy playing on area stages at the moment. A few are billed as such, but they have elements which color them as somewhat melancholy. Go to "Sylvia" and enjoy pure laughter.
at 11:03 AM No comments:

"Present Laughter" is a truly well-acted show.  Gary Powell is a wonderful Noel Coward stand-in, as the matinee-idol Garry Essendine. But, the character I enjoyed most was the stuttering, motor-mouthed aspiring playwright Roland Maule. (Jake Simmons) Most of Coward's wit is dry, but the Maule character provides the easier laughs.  It's a light show, but with traces of melancholy. A tale of love, friendship, and theatre.
at 3:08 PM No comments:

Vana O'Brien's performance in "Broomstick" is truly phenomenal. Nearly 90 minutes of just her on the evocatively decorated set, reciting a rhyming poem. She makes a wonderful witch. The strength of her performance could almost justify "Broomstick" becoming a Halloween perennial, solely on its merits, but a few moments in John Biguenet's script are just a shade too dark to be comfortably rendered in rhyme. Another way to describe it would be as an occasionally off-putting tonal mismatch. But again, Vana O'Brien's performance is frightfully good.
at 4:44 PM No comments:

"Ain't Misbehavin'" boasts exceptional vocal talent, as is to be expected. It is also a show that lets actors of color have the spotlight, something I don't remember seeing since last season's Opener, "Dreamgirls". It's nice to see.

One criticism of "Ain't Misbehavin'" is its Broadwayization. I convinced my father, a reluctant a Broadway Musical attendee as there is, to go to "Ain't Misbehavin" on the strength of "Ain't Nuthin' But the Blues," which we saw at PCS together. I too must confess a preference for the quieter, less showtuned songs, many of which are found in the female solos that were at times showstoppers in a way that is the opposite of how that term is typically used, but that doesn't make it any less true. I also would have appreciated a little more "book", something similar to "Million-Dollar Quartet."

The revolving set is among the best I've ever seen, and it is sure to provoke ooohs and awes. PCS has certainly outdone themselves in every way for this show
at 4:30 PM No comments: