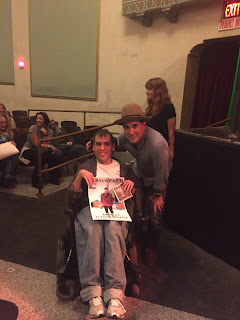 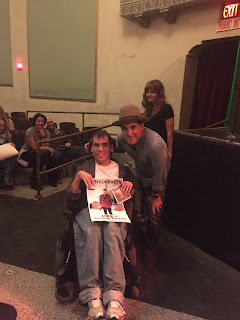 "In the Heights" @ Stumptown Stages

Please bear with a little bit of obsessiveness on my part, I can virtually guarantee that you won't find this information anywhere else: There is one play that unites 3 of 4 of  Stumptown's Current Season, Paul Simon's ill-fated musical "The Capeman."

Stumptown Show 1: "Carrie" a flop of legendary proportions that is often mentioned alongside "The Capeman," both have also had recent revivals.

Stumptown Show 3: "Smokey Joe's Cafe" was directed on Broadway by show-doctor Jerry Zaks, who was selected because of his experience with '50s music from that show.

And finally, Stumptown's latest show "In the Heights," known for breaking "The Capeman Curse." It was the first show featuring a predominately Latino cast since the failure of " The Capeman."

"In the Heights" is a production that very much deserved to break that barrier. It has a vibrant score by Lin-Manuel Miranda, who is  garnering wide acclaim for "Hamilton." Both of those shows feature Miranda's  truly unique brand of hip-hop. (It's not often that Cole Porter gets name-dropped in hip-hop, and that now seems like a minor feat compared to the genre-bending of "Hamilton." )

Stand-out numbers include:"It Wont be Long Now" and "When You're Home." This next statement is hard for me to write, given my love for "The Capeman," but it also refreshing to see Latinos given a throughly positive portrayal, rather than the knife-wielding thugs of "West Side Story" and again, with "The Capeman."

"In the Heights" is an exuberant show, and for that it must be admired.
at 12:58 PM 1 comment: Links to this post

There is no denying that "Church Basement Ladies"is a fun show. There is a variety of humor in the show, from lighthearted to unexpectedly dark, delivered with a smile.  But, it must be noted that a fair amount of the humor, and even some of the songs rely on the finer points of Lutheranism  and Minnesota Cuisine. At times it felt like being left out of an inside-joke. I noticed in the program that the show was first produced in Minnesota, and I got the feeling that Lutheranism must be especially prevalent there. By far the best part of the show was the fully-committed and perfectly cast actresses. And the set deserves a mention as well, designed by the supremely talented Chris Whitten, whom I have become a fan of through his frequent work with Clackamas Community College.

"Church Basement Ladies" is an enjoyable production, but again, one that might be more enjoyable to those with more familiarity with its themes.
at 11:53 AM 1 comment: Links to this post

I have not been to a Profile Theatre production since Neil Simon's "Biloxi Blues," when the company was still a tenant of the now defunct Theater! Theatre! building. Profile is now part of Artist's Rep's Arts Hub, and I was quickly reminded of what I had been missing. Profile, as its name implies, specializes in focusing upon a single playwright for an entire Season. This Season's playwright is Tanya Barfield.

"Blue Door" was nominated for the Pulitzer Prize, and it is easy to see why, this 90-minute whirlwind examines a wide-swath of history, and one of the actors in this two-hander plays three roles, in Porfile's case, Seth Rue who handles that monumental task with great skill. But I must note that I first became interested in it because Victor Mack stars in it, and I have missed his presence on local stages. I hesitate to write "this marks his return", because I'm unsure if he had left, but in any case, I'm glad to see him.

"Blue Door" is a showcase for two exceptional actors  and an eloquent playwright, and a welcome reintroduction to a unique Portland theatre.
at 8:25 PM No comments: Links to this post

Reviewing "The Pianist of Willesden Lane" will strain my vocabulary, both because it is so deserving of every superlative I can conceive, and because I lack familiarity with the terms used in Classical Music. "The Pianist of Willesden Lane" is a one-woman show by Mona Golabek, based upon the life of her mother, told at a piano. Ms. Golabek's mother was a refugee on the Kinder Transport from Vienna, fleeing the Nazi Occupation. Ms. Golabek tells the story through truly virtuosic piano-playing, accompanied by vivid projections of relevant imagery.

"The Pianist of Willesden Lane" is a completely immersive experience, and one that shines light on current events, insofar as it deals with a refugee crisis, and I was reminded with shame of our national inaction regarding Syrians, it is a show worthy of boundless praise, a show about bravery, a show about desperation met by kindness severely lacking in today's world.
at 11:52 AM No comments: Links to this post

"The Three Amigos: LIVE" at Stagewarks Inc.'s new home at the Clinton Street Theatre is funny in ways only a Stageworks Inc. Production can be. Stageworks Inc, or maybe more accurately, its Artistic Director, Steve Coker is a master of hilarious subtlety. He will come up with something to do with a production's low tech prop that just exemplifies why the parody belongs on stage: The Three Amigos ride on stick-horses which is hysterical in itself, but, in the film there is this unremarkable line about Carmen readying their horses for a big fight, however when Carmen says the same on stage, she drops the stick-horses on the floor loudly. It's one of the best moments of the show, and only Mr. Coker would come up with it. Plus, all the classic moments from the film are there, and if that's not enough, there's also silly-string shot into the audience.

I am pleased that StageWorks has moved to the larger Clinton Street Theatre, I sincerely hope this means that more Portlanders will get to experience its utter uniqueness.
at 9:50 AM No comments: Links to this post